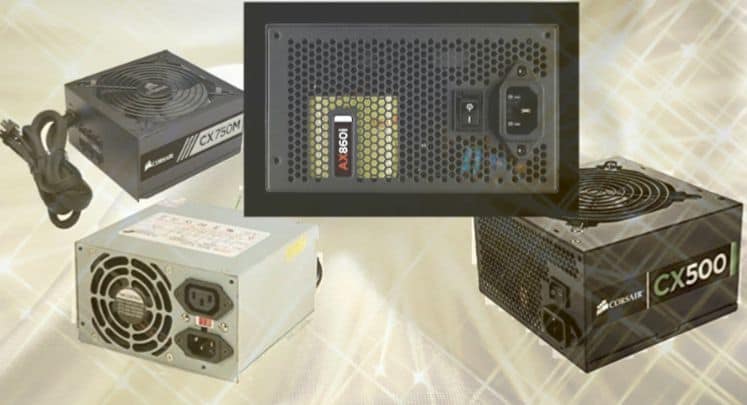 Corsair power supply units play a big role in supporting your computer. These PSUs convert the alternating currents, in your PC, into direct currents. This direct current serves as a continuous power that fuels your computer components.

Now, Corsair offers several units that have different specifications to match your needs and preferences. Not sure which one's right for you? No need to stress. In this article, you’ll find all the key differences between Corsair power supply units.

This power supply unit would be perfect for basic workstations, work computers, and low-end gaming systems. As you’d expect from something branded as “basic”, the CX line isn’t too hard on the wallet. Under this series, there are four different models. These models are the CX430(M), CX500(M), CX600(M), and CX700(M). 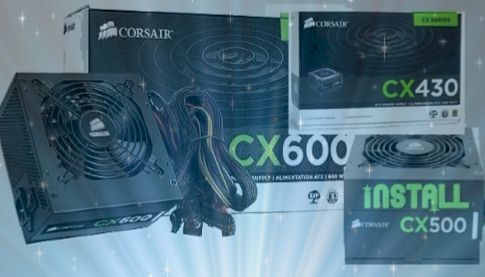 All models share similarities with their -12v Amperage of 0.8, +5Vsb Amperage of 3, -12V Wattage of 9.6, +5Vsb Wattage of 15, and power efficiency of 83% at half load and 84% maximum. The rest of the qualities only differ from each other slightly.

If you’re planning to build a low-end Athlon or Ryzen rig, or even one that runs on those current-gen Pentiums, the CX430(M) or CX500(M) should be more than enough. Well, that is assuming that you won’t be pairing those CPUs with power-hungry GPUs.

Unlike the Basic Series, the Corsair GS - Pure Gaming Series was built entirely for Gaming PCs. Surprisingly, however it merely has an 80 Plus efficiency rating which is a little less than that of the CX series. Is it because most gamers don’t consider efficiency as a priority? 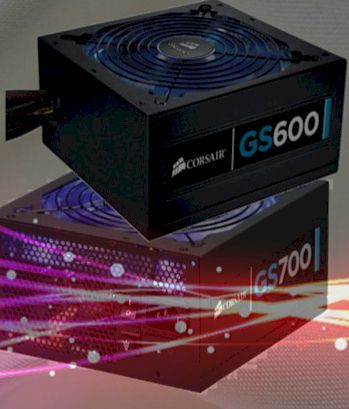 Possibly to make up for that, GS power supply units support SLI and Crossfire technologies—which the hardcore PC gaming crowd will surely appreciate. GS PSUs also come with RGB LEDs to give your rig a bit more personality. And yes, gamers these days do love RGB.

Other than that, the GS line features proactive fan control management, which should help in keeping the noise down. Surely, no one would want to be distracted by a fan’s constant buzzing during the most intense gaming sessions.

Under this series, there are just two different Models. These are the GS600 and the GS700. Despite having different wattage ratings (as you’d expect), they are essentially identical.

This series is the outcome of combining two series to achieve a balance in features and specs. The CS series is a mix of the GS series and the TX series. It was given an 80 Plus Gold power efficiency rating.

This series features semi-modular cable management and a thermally controlled fan. This fan doesn’t make noticeable noise and has a maximum of 24dBA (up until the system goes past 50% load).

It is designed with 62A on the +12V single rail to ensure consistent power on your mid-range gaming pc. Besides, this also allows for an SLI or Crossfire setup. The CS - Series runs at 90% Power Efficiency on 50% load and 87% on 100% load.

This series is perfect for you if you’re a custom computer builder, or simply an enthusiast. It has two versions, with TX-M being the latest as compared to the earlier generation TX. As made clear by Corsair’s chosen naming scheme, the TX-M is semi-modular while the TX is not.

The TX, regardless of which cabling type you chose, is recommended for builds designed for both gaming and daily use. It is a direct step-up from the CX Basic Series and thus is much more expensive. It’s equipped with a ball-bearing cooling fan that is larger and quieter than those equipped in most other Corsair PSUs.

Additionally, it has a higher wattage range, which seems to be inherited from the GS Series. This will allow for better pairing with high-end video cards.

If you’re looking for a Corsair power unit that’s for gaming or media builds, then the RM should be a great choice. The PSUs from this line come with 80 Plus Gold certification. While impressive, the RM is a tier lower than the HX and AX when it comes to energy efficiency.

This series is quite popular among enthusiasts since it completely relies on Japanese capacitors. Although it’s true that not all non-Japanese caps are bad, there is a much bigger chance that you would run into problems with them. 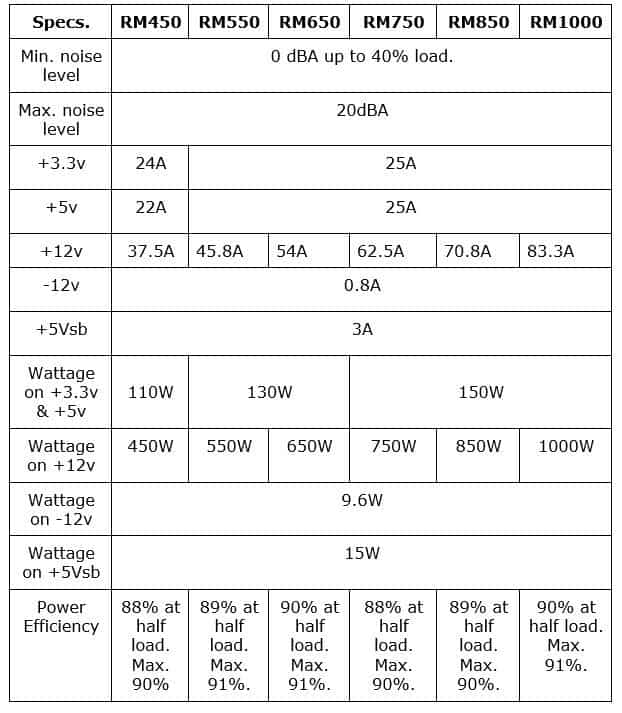 If you’re looking for the more high-end Corsair power supply units, then the HX or AX lines are the ones you need. Corsair HX has a fully modular cable design, and that gives it an edge against the TX-M.

More importantly, it has an 80 Plus Platinum rating. It utilizes 140mm double ball-bearing fans that cool the internal core. On top of that, it even moderates the noise level as a smart controller controls when the fans turn on and off. The HX750W series is known to be the quietest PSU in the Corsair line up. 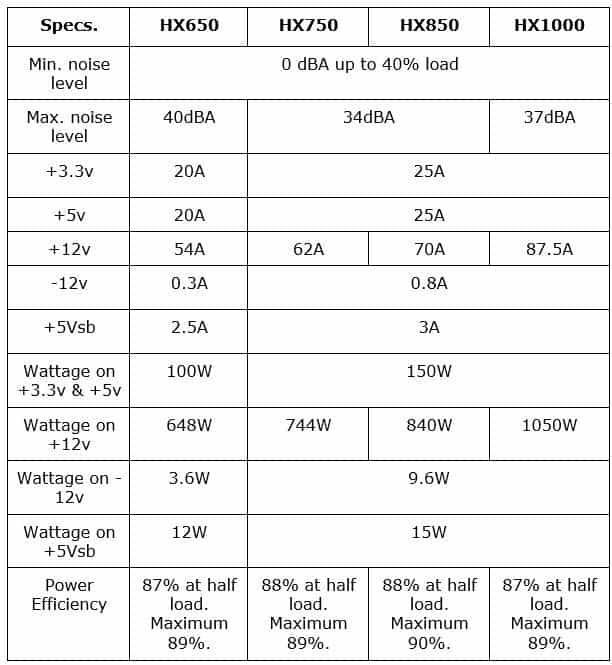 This is also known as the flagship line among the many Corsair power supply units. In other words, the AX is superior to every other series in almost every possible way—except affordability, of course.

This top-of-the-line series features an intelligent fan and temperature monitor link. It has three models which are the AX760, AX860, and AX1200i. The AX1200i has received high praise from well-known reviewers.

As you would surely notice, the AX only comes in high power options as they’re designed to handle only the most demanding of systems. 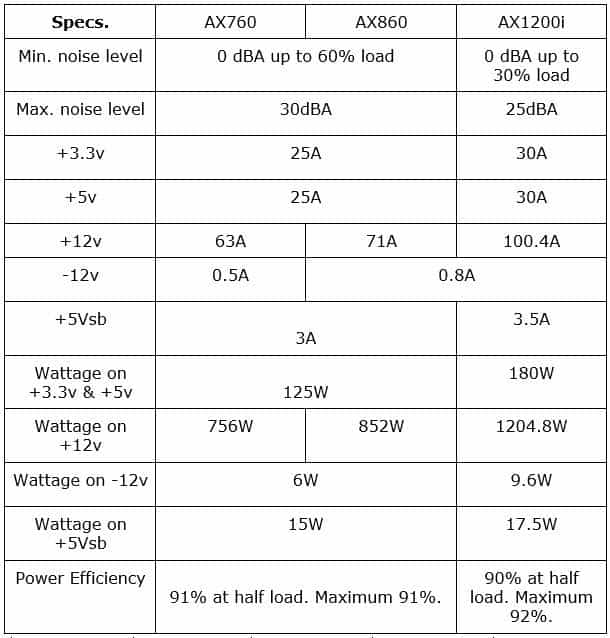 Well, that’s it for this list of the Corsair Power Units! Did you find one that would best suit your tastes and target build? Hopefully, this helped you pick out a PSU that’s perfect for your rig!