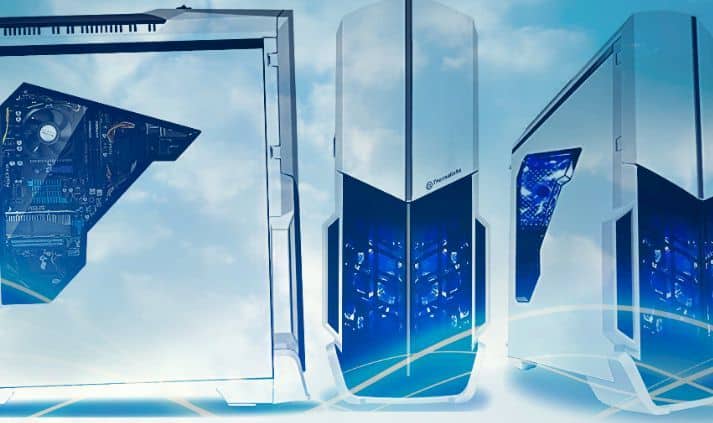 Pre-assembled gaming computers are not quite popular with most gaming enthusiasts. Hardcore gamers and PC enthusiasts prefer building their own gaming systems themselves. There is still a market for it though among casual gamers who want to avoid the technical aspects of building a gaming PC all on their own. These people simply may not know what parts to use and how to mix and match them in the most optimal way.

System integrators like SkyTech specialize in building gaming rigs for casual gamers. These PCs are built with reliability and cost efficiency in mind – both are factors that most people consider when buying a pre-assembled gaming computer.

According to the company’s website, here are the specifications for the SkyTech Archangel GTX 1050 Ti Gaming Computer:

Note: VGA not supported; an adapter may be required.

Let’s start with this system’s processor. It is an AMD FX-6300 with 6 cores with a decent clock speed of 3.5 GHz that can turbo clock to 4.1 GHz. This is a relatively fast processor aimed at gaming in particular. This model is an unlocked version, which is good if you’re into overclocking. Heat will be an issue though as the system is simply air-cooled. Having six cores instead of the usual 4 in desktop gaming computers is a great thing as most games nowadays do utilize multi-threaded workloads. It still doesn’t compare to its Intel counterparts, but it performs well enough while keeping the costs down for the system.

The PC’s graphics card is the popular NVIDIA GTX 1050 Ti. This is arguably the best graphics card for 1080p gaming. It performs well on more demanding games and even more so on light games such as e-sports titles. The downside of having a card like this is that you can only expect it to do well on 1080p. If you are hoping to bump up the resolution, you will have performance issues. This is to be expected on an affordable gaming rig, though.

The 8GB of DDR3 memory is sort of a letdown. Although it’s nice that it has its own heat pad, the smaller size and slower clock speed is a little disappointing. Nowadays, 8GB may not be enough as software and applications get more and more resource-hungry. Despite the company’s insistence that they are a high-performance gaming memory, multi-tasking on this PC will definitely slow down the system by just looking at the numbers alone.

The power supply is just enough to handle all the hardware on the system, but do not expect it to be an amazing one. If you are planning to upgrade this PC in the future, do consider getting a better power supply first as 430 watts will not be enough. Once you get better hardware, it will inevitably consume more power.

You don’t get a solid state drive or SSD with this system. You are stuck with a mechanical hard drive that is definitely slow and old compared to an SSD. In 2020, having an SSD is a necessity. Games and applications are getting heavier, and the faster speeds of an SSD will give you a smoother and lag-free experience. Expect longer load time and boot times for this PC.

Despite the modest internals of the SkyTech Archangel GTX 1050 Ti Gaming Computer, the design is beautiful. It is reminiscent of Alienware’s angular design elements, plus the white and blue color scheme is a welcome change to the red and black that is so common in gaming PCs nowadays.

The chassis is mostly glossy plastic, and the glass is acrylic. The glass panels don’t cover the whole side of the computer, which restricts the view of the insides. This is okay as most of the parts inside are not visually pleasant anyway.

Customer support is something that is not usually included in tech reviews as most hardware have decent warranties and big companies do their best to make sure you are satisfied. However, with system integrators like SkyTech, customer service is an important aspect to consider.

Part of the charm of system integrators is that you can expect to have some help whenever you run into problems with the product that you got from them. SkyTech doesn’t seem to have a firm grasp on how to provide good customer support.

There have been reports on this model often being faulty. Sometimes, it refuses to start or simply breaks down and repeatedly crashes after a few weeks of normal use. Other times, the ports don’t work and parts installed the system can differ. This is indicative of poor quality control from SkyTech, and what makes it worse is that it can be difficult to get in touch with them.

The SkyTech Archangel GTX 1050 Ti Gaming Desktop Computer is a decent budget-friendly gaming computer that delivers great entry-level performance. You can expect to have minimal problems gaming with it on 1080p.

SkyTech has done both good and bad things when cutting corners to keep this gaming computer priced affordably. The subpar power supply is something that can cause some worry, and the second-rate memory leaves much to be desired. However, their processor and graphics card choices were excellent for the price and can be expected to perform well. The mechanical hard drive is OK at best, but upgrading it with an SSD can be easy to do by yourself.

Beautiful and affordable, the SkyTech Archangel GTX 1050 Ti Gaming Computer is a decent system - as long as you don’t get a faulty one.