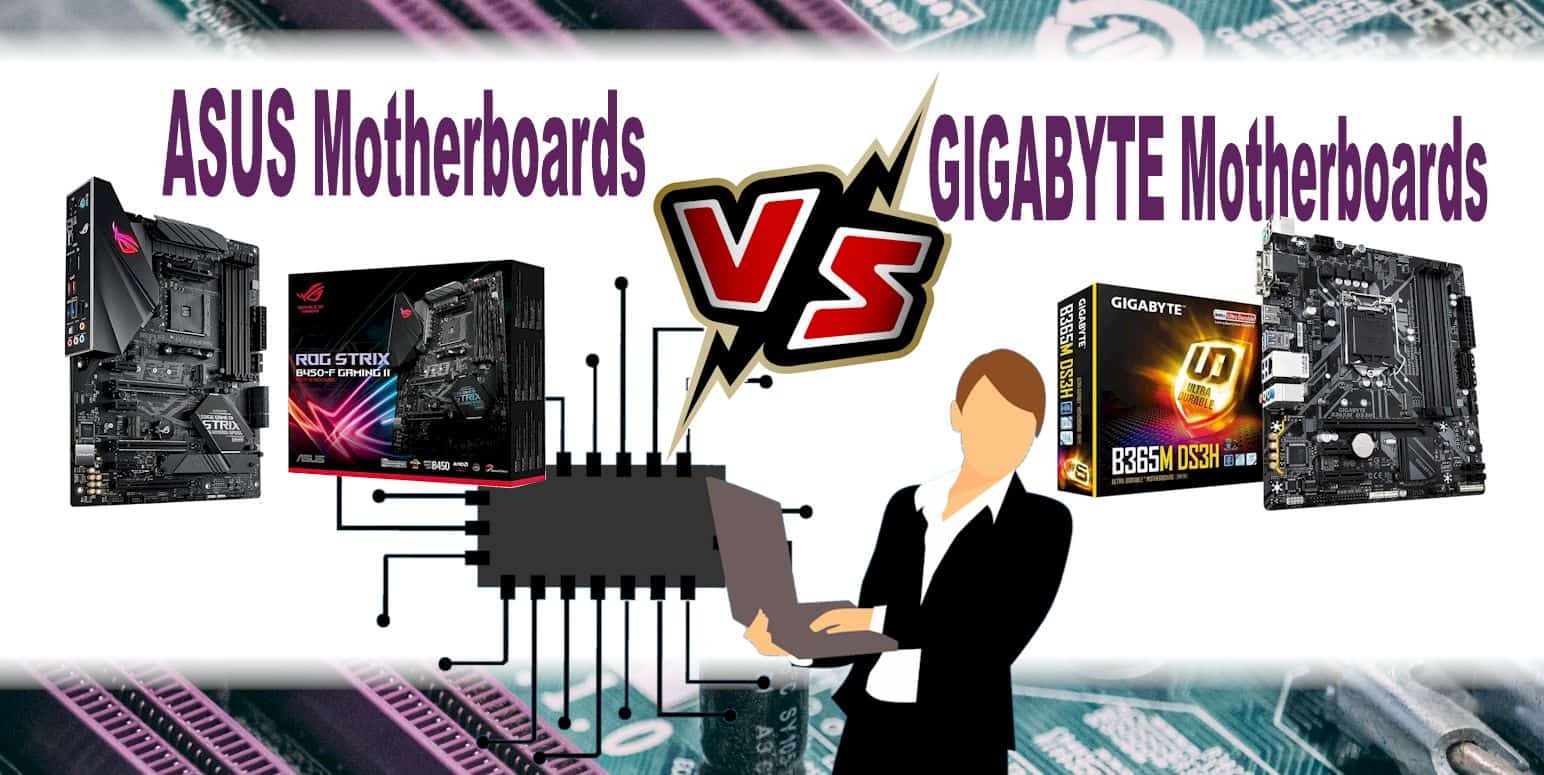 Gigabyte and Asus are among the top brands in computer and computing. Therefore, it is no wonder that you can be caught up between the two, especially when it comes to performance.

Though it is argued that Gigabyte outdoes Asus in performance, this is the case only when we are talking about high-intensity computer workload. That notwithstanding, the two can compete fairly. And when we talk of computer functioning, the motherboard is always the center of it all.

So, ready for a head-to-head battle between Gigabyte vs. Asus motherboards?

Why I Love Both Asus and Gigabyte Motherboards

Honestly, I was in your dilemma almost a decade ago, wondering which between the two would serve me best. Then again, at my age and income, I would definitely go for the cheapest option. Therefore, I found solace with Asus, which was never a disappointment.

Nevertheless, my craving was never satisfied because I always dreamed of owning a Gigabyte motherboard for my computer functions. Besides being an avid gamer, I had also developed an interest in graphics, both of which I knew that a Gigabyte model would handle at its roughest.

Now that I have both experiences, I couldn't help but join in the current hype about which of the two outsmarted the other.

The best part about Asus is that you can easily decide on the type you want in the range available for each function.

If you are up for gaming, then you can consider a ROG motherboard (Republic of Gamers). It has utilized the most recent AI clocking form, whereby the speed is automated courtesy of cooling quality and silicon. The software allows for continuous training without overheating.

Still not content with that? There is also TUF Gaming, which is a little more expensive, but trending with Intel and AMD platforms. The two can easily blend with more game features, while the games will not crash it. This is due to the military-grade components, which facilitate cooling to ensure an unwavering gaming experience.

Let's talk about Asus Prime, which, more than TUF, brings you the full potential that Intel and AMD processors have to offer. It was my top choice then, and it still is, given that the powerful motherboard is damn so durable and powerful. It is suitable for the common user, with standard features for everything you require for everyday use.

Then there is ProArt, which would have been my next choice in the later purchase if I wasn't so obsessed with Gigabyte. It facilitates ease in designing 3D models, media production, and even animation. Not only will you find convenience in your art, but the motherboard boosts overall creativity.

If you are looking for a computer that will facilitate deep learning and working, Asus Workstation is for professionals. Whether you are up for intensive education on AI, 3D and rendering, and IT, this is your best alternative.

Moreover, Asus has a corporate's best CSM (Corporate Stable Model), which features the tiniest details that corporations and businesses will want to utilize. These include IT management, ECN control, among others.

If CSM is still not at your satisfactory level, you can consider Asus Business, especially for your business IT team.

Gigabyte draws excitement just as much as Asus, if not more. And this is especially so if you are a gaming die-hard.

Since I was lucky to consider Gigabyte when I had a better income, I chose AORUS, a real treat in intensive gaming. While its price may put you off, its consistency in even the upcoming and more challenging computer games is unmatchable.

Thirdly, Gigabyte has a Server/ Workplace, which essentially does great in an office environment. Other than compatible features for the business or office, the motherboard has amazing connectivity that keeps you connected, easily downloading and uploading large files.

Closely following is the Ultra-Durable motherboard, which is suitable for harsh conditions. If there is even the least possibility for connection, this motherboard will take advantage. Moreover, it lasts long, even in remote conditions, mostly by withstanding impact.

Finally, the Embedded/ IoT is great for AI and other Internet of Things stuff. It also features impressive connectivity while bringing onboard features that you will utilize on the internet.

Though both motherboards are competitive, below are some of the features and things that distinguish them:

Similarities Between Gigabyte and Asus Motherboards

Gigabyte vs. Asus motherboards? At this point, your dilemma must already be minimal, at least with what you have gathered here. Now you can make an informed decision on which motherboard to consider over the other.

For a budget motherboard, I will go with Asus without a second thought. However, if I want uncompromised performance on high-end deals, Gigabyte is my all-time option.