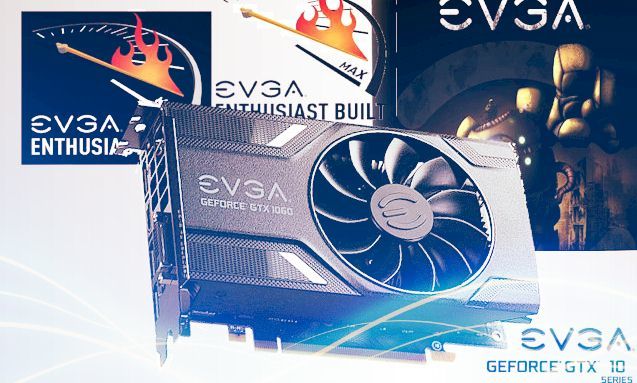 The GeForce GTX 1060 is NVIDIA’s latest mid-range Gaming Graphics Card set to take the next generation’s graphics card war ablaze. Carrying the GeForce banner for the next-generation of mid-range budget cards, it completely overwhelms the last generation’s GTX 980 with higher clock speeds, bigger video memory matched with higher memory bandwidth. EVGA delivers a batch of different builds for the GTX 1060, which promises to deliver the Gaming Graphics Card suited for any gaming need.

This GTX 1060 Review will deal with this revolutionary card’s specifications and features to truly show what this next generation card can truly do and can help decide whether it’s worth taking a bite at the future.

A batch of different builds for the GTX 1060

Powered by the NVIDIA’s breakthrough in Gaming Graphics Card technology, the Pascal GPU Architecture powers the GP104 which is the backbone of the GTX 1060 cards. It can support up to 4 monitors with a maximum digital resolution of 7680×4320 and up to 240Hz refresh rate, which is good news for gamers who like to experience their games using multi-display settings with its comparably high specs. Featuring 1280 CUDA cores, the GTX 1060 can easily play video games at high settings without sacrificing frame rate or introducing visual artifacts and is perfectly capable of playing AAA game titles at 1080p and 1440p resolutions. Coupled with the NVIDIA GeForce GPU Boost 3.0 and a powerful PSU, the GTX 1060 can reach higher clock speeds without even touching any overclock settings.

GeForce GTX 1060 also supports HDMI 2.0b, DisplayPort 1.4, and Dual-Link DVI display interfaces. This Gaming Graphics Card’s HDMI support also includes GPU-acceleration for Blu-Ray 3D technology, as well as support for the x.v color hardware, and HDMI Deep Color. Buying the NVIDIA 3DTV Play software is recommended to upgrade the GTX 1060 Gaming Graphics Card to its full 3D capability and allows for stereoscopic 3D gaming, movie, and video streaming. The GTX 1060 also has support for the latest DirectX, OpenGL, Vulkan API and Virtual Reality technologies which makes it compatible with most video games and graphics design applications. It is also compatible with NVIDIA’s G-sync monitors as well as Simultaneous Monitor Projection. NVIDIA Ansel also gives this card the power to capture in-game shots in 360 degrees for viewing with VR headsets, and stream games to 4K HDR TVs with NVIDIA Gamestream.

But what about the Power Supply requirements? By itself, the GTX 1060 Graphics Gaming Card only draws a total of 120 watts at full load compared to the last generation’s GeForce GTX 980’s 200 watts at full power. EVGA recommends a minimum of 400 watt PSU output for all of their GTX 1060 cards, but overclocking will probably demand more power, so higher PSU output is recommended.

Comparison with Other GeForce GTX 1060 Cards

Superclocked (SC) EVGA cards boast great performance and great cooling, perfect for the gamer who wants to get the most out of his card with optimal overclocking settings to get the best FPS out of video games. The EVGA GeForce GTX 1060 SC, 6GB GDDR5, ACX 2.0 (Single Fan), 06G-P4-6163-KR boasts a hefty base clock of 1607 MHz, and coupled with dynamic boosting technology from GPU Boost 3.0; it can reach boosted clock speeds up to 1835 MHz without touching any overclock setting.

The Precision XOC also has the K-Boost Function, which can maximize overclocking, and the EVGA OC ScannerX Integration, which makes overclocking easier by automatically searching for the optimal voltage-to-frequency settings curve for the card. EVGA Precision XOC works with all EVGA GeForce 10 series cards, including all the cards in this EVGA GTX 1060 Review.

For the gamer who has a bigger budget for better performance, the EVGA GeForce GTX 1060 SSC, 6GB GDDR5, ACX 3.0 & LED, 06G-P4-6267-KR is probably the best GeForce GTX 1060 Gaming Graphics Card offered by EVGA. SSC means Super Superclocked and is EVGA’s top-of-the-line hardware, offering both the best performance and the best cooling in each series.

The EVGA GeForce GTX 1060 SSC GAMING card boasts the same speed and performance of the EVGA GTX 1060 SC GAMING card but comes with the newer EVGA ACX 3.0 Cooling, which is a complete redesign of the 1.0 version and feature optimized fan blades, double bearings, and an extremely low power motor, which promises to deliver more airflow cooling while consuming less power for the GPU. It promises to be 26% cooler while consuming 250% lower fan power than ACX 1.0. This means better overclocking temperatures, and possibly better maximum overclocking settings with the Precision XOC technology.

At the lower end of the bracket, the EVGA GeForce GTX 1060, 6GB GDDR5, 06G-P4-5161-KR,  is the cheapest GTX 1060 card from EVGA. It clocks at the same speed as the GTX 1060 SSC DT GAMING card with 1506 MHz but only features a basic Heat sink and Fan (HSF). While it doesn’t have the cutting-edge cooling technology of EVGA’s ACX, it’s the best budget card for people who don’t want to be left behind in the Gaming Graphics Card race, and it can be overclocked like the other EVGA GTX 1060 cards. While this card can’t reach the overclock temperatures of the better GTX 1060 SC and SSC cards, it’s a good choice for people who prefer to use aftermarket cooling fans or people who prefer to use their own cooling rig for their gaming system.

Perhaps one of the major drawbacks of the GTX 1060 is the lack of the SLI connector. This means games won’t benefit from multiple gaming card configurations, and they won’t be able to provide higher gaming frame rates and performance that are possible with the GTX 980 and the more powerful GTX 1080. The GTX 1060 is already powerful by itself, but the lack of SLI technology means that gamers would only be limited to overclocking to get the best performance from this Gaming Graphics Card for higher frame rates and benchmark scores. The EVGA GTX 1080 series offers SLI technology along with higher clock speeds, performance, and video memory capacity at a higher price tag.

All in all, the EVGA GeForce GTX 1060 cards promise great performance for great prices, good for both the average and hardcore gamers on a tight budget. With a good range of prices to choose from, a gamer can certainly find the right Graphics Gaming Card that would suit their gaming needs for the perfect price.